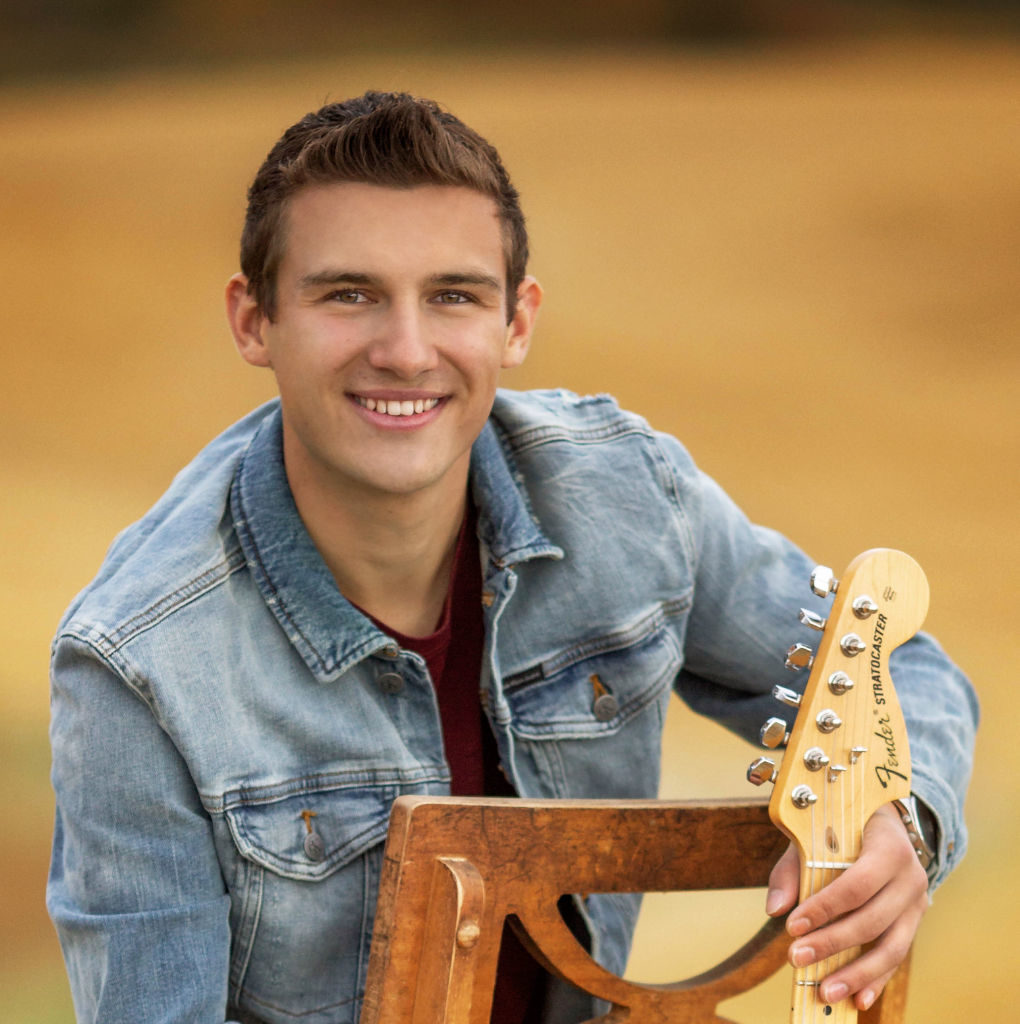 An emerging artist who commands the stage with his infectious energy.

Travis is ready to share his stories with the world!

Travis is an energetic artist with a love for performing and keeps the audience engaged with his intriguing smile and witty humour, making the entire show a performance to remember.

Travis grew up on the family farm about an hour drive from Edmonton, near the Village of Hay Lakes AB.  He is currently attending the University of Alberta, Augustana Campus, in Camrose, where he is majoring in Kinesiology and minoring in Music.

Travis was immersed in music early on with the family band, the Polka Ramblers. It was always just a matter of time until he would perform with his mom, sister and Baba (Grandma). Travis grew up on the stage! He recalls packing his sleeping bag when he was younger, so he could sleep on the stage while his family finished performing at the booking! Travis began singing in the family band when he was 6, and by age 12 he was playing guitar as well, making the stage his own and bringing a new dynamic to the show. From the time he was 8 years old, he would find a way to perform with other bands at any open dance he and his family attended.

In 2014, when Travis was 15 years old, he started his own band, Travis and the Boys. He shared the stage with friends his age allowing him to pursue more opportunities as a singer and musician.

Growing up surrounded by music, as well as attending concerts and watching entertainers like Dierks Bentley, Kenny Chesney, and Brett Kissel, inspired him to play and sing.  When he saw “The Buddy Holly Story” a spark was ignited inside him. From that moment on nothing would stand in his way of doing what he loved and sharing it with others.

Travis was presented the Premier’s Citizenship Award as well as the Principal’s Award in grade 12 for his involvement in the school and community.  He also received the Senior High Music Award. He attributes his skills as a guitar player and singer to his high school music teacher, as she challenged him to always be the best he could be. Enthusiastic about helping others, Travis has volunteered to perform for many fundraisers such as the Hay Lakes Ag Society, Armena Athletic Association, Viking Museum, Kids Sport Fundraiser, Kingman Grains for the Hungry and many more.

His love for entertaining carries through in everything he does. In high school, he would entertain students not only with his guitar but also by performing magic tricks, putting on shows for students in grades 1 -10, leaving them all mesmerized.

Travis was fortunate enough to be involved in many activities growing up. He began Ukrainian dance when he was 5 and continues to perform as his schedule allows with the Camrose Veselka Ukrainian Dancers.  Through junior and senior high school, he also played volleyball, soccer, basketball, and competed in track & field events; high jump and x-country running. In Grade 12, he helped lead his high school basketball team to the first ever 1A Provincial Gold for the Central zone.  Travis is currently a member of the Augustana University Men’s Soccer Team and enjoys participating in recreational sports. From 2012 to 2017 he raced stockcars, first in a Mini Cup and later in a Baby Grand for the Dolter Motorsports Race Team. One race day in Medicine Hat while the crews were setting up pit stalls and preparing the cars to race, Travis could be found in the race trailer, playing ‘name that tune’ on his guitar for the other young drivers.  In August of 2017, after 6 years of racing, he passed the wheel to his sister, so he could focus more on his music.

In May of 2017 he was MC for his Graduation Ceremonies and took the opportunity to write and perform a song for his classmates and all in attendance.  The response he received inspired him to start writing songs on a regular basis. Travis has developed strong song writing skills and takes the opportunity to turn every story into a song. His songs have an exclusive sound as each one is individual to itself.  He is a versatile artist, seamlessly transforming between originals, classic country, new country and old rock n’ roll.

Travis has performed at Performing Arts Centres, Festivals, Clubs and Special Events. Highlights include opening for Hey Romeo, entertainment headliner for the NASCAR Pinty’s Luxxur 300 Race and he has been a 4-time performer at the Radway Festival of Stars!  Over the years Travis has also performed many solo shows.

Most recently, Travis was a finalist in the 2018 Big Valley Jamboree ATB Homegrown Talent competition where he exceeded all expectations from judges and mentors.

In pursuit of becoming a Country Music Artist he has been meeting with fellow musicians and songwriters, as well as taking part in Showcases, attending Workshops and getting Vocal and Stage Coaching.  He has initiated new social media sites and a website. Travis has been working hard to promote his music through these means.

Travis’s stage performance is all about bringing out the positive and laughter in life and sharing stories and good times.

Every Song… A Story