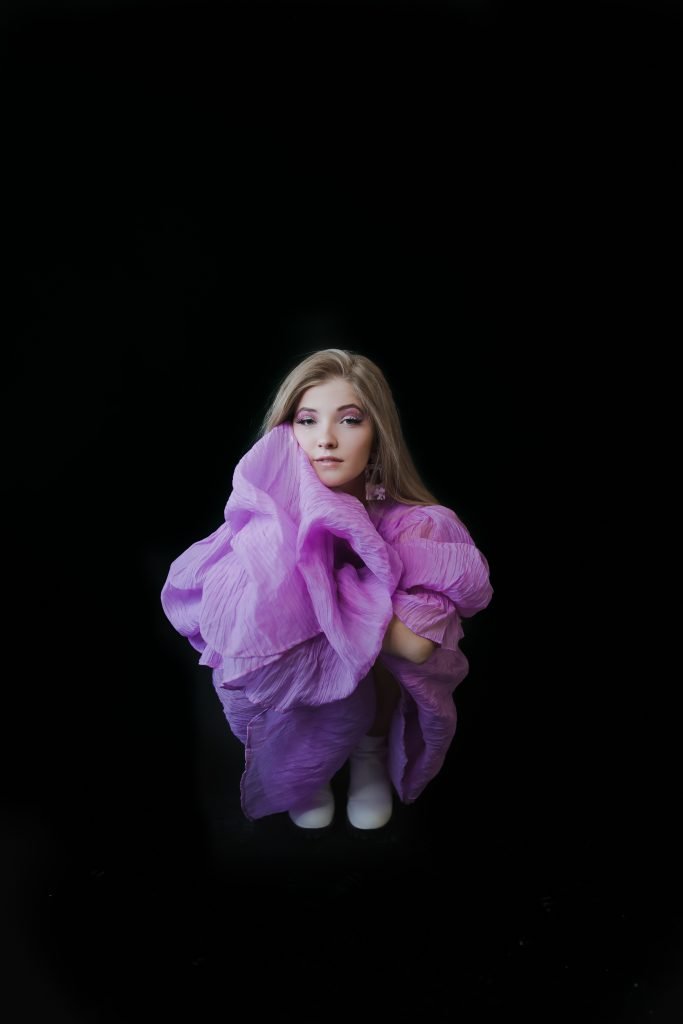 Although Jennie Harluk’s songs rely heavily on her long-time love of straight-up storytelling, the Calgary-based singer/songwriter is less concerned about her music fitting neatly into a genre than ensuring it sinks deep into the heart and soul of her listeners.

Harluk’s latest single, ‘Blame It On Me’, is no exception. Scheduled for release on July 23rd, 2021, the song finds Harluk expanding her musical palette with a track that’s relentless, but highly personal – an anthem of self-discovery, self-love, and all-around empowerment. “‘Blame It On Me’ is about being unapologetic to people who let you down. Whether it’s a friendship or relationship, you don’t owe people who hurt you any explanation for what you do for your own happiness, and if they have a problem with that, they can blame it on you.”

She picks up on that thread again on ‘The Fool’ – a lighter and more playful sounding offering, but one that packs an even harder emotional punch. “It’s about the kind of heart-wrenching truth I think a lot of people can relate to; how, when you’ve given your all to somebody and stuck with them through their worst moments – even when they’ve hurt you, lied to you, and betrayed you – you stayed, and they ended up leaving.”

“At the core, it’s about the kind of heartbreak that, even though it’s no fault of your own, you struggle to understand and blame yourself for,” she says. “Even when people try to comfort you with clichés like ‘The joke’s on them. It’s their loss’ or ‘They never deserved you anyways,’ it still leaves you feeling like ‘The Fool’ – stupid, weak, and wondering how you could be so blind as to let this happen to you.”

“When I have an idea for a song, I see colours,” she continues. “So, a song might be purple and silver or have a texture like denim or coffee, and that translates into the lyrics and sounds.”

These two newest tracks – co-written by Harluk, producer Sam Jackson Willows, and Joseph W. Salusbury (AKA Joseph of Mercury) – find Harluk relying on that more than ever. “Because of my Synesthesia, I see colours vividly with both of these songs. That’s always a prominent aspect when I create music and the visuals around them. And I’m very excited for people to physically see what these songs look like to me; purple, neon, and smoke for ‘Blame It On Me’, and green, hardwood, and flowers for ‘The Fool’. I had a full hand in the visual process for both songs and they turned out beautifully; exactly how I’d seen them in my head.”

Many young artists experiment with different sounds and genres before finding their voice as a performer and writer, but regardless of the instrumentation surrounding Harluk’s vocals or the genre that inspired a given track’s production, it’s abundantly clear she has no interest in sounding like anyone other than herself. Whether it’s on early releases like 2016’s ‘Suitcase’ (which was released when Jennie was thirteen and spent almost three months on the Top Ten Countdown of Nashville’s influential Internet radio station, Music Road Radio), or more recent offerings, like 2019’s ‘Fire’, Harluk’s powerful signature sound is like no other.

No matter the treatment or topic of a tune, Harluk displays an uncommon ability to tell a story so vividly you can see it unfold in your mind’s eye as you listen – a talent Harluk put a significant amount of time into developing.

Harluk began studying piano when she was six, just about the time her father (an accomplished musician and performer himself and her most important musical role model) purchased a second-hand guitar for her). By age 10 she was performing regularly and writing songs. “I didn’t start writing using instruments. I just wrote using melodies and words in my head,” she explains. “I only learned guitar a few years ago,” she adds, “just to have something I could bring to gigs and support myself.”

Since she’s continued to hone all aspects of her craft and brings equally impressive performance chops to the stage and the studio, along with an ability to infuse her music with emotional weight and lyrical depth well beyond her years.

Over time, Harluk has played at a wide range of events and venues, ranging from Alberta’s iteration of the Country Thunder Festival and various Calgary Stampede events, as well as at coffeehouses and all-age venues. Harluk has also spearheaded the development of a local concert series of her own, Country Night Live, which she co-hosts, performs at, and showcases the talents of other local artists to support local charities.

Regardless of whether she’s writing from personal experience or pure observation, performing solo or with lush instrumentation, the impact is just as captivating. On record and on stage, Harluk’s approach is never about striking a pose, it’s about warmth, honesty, and connection. For Jennie Harluk, music isn’t so much a career choice as a lifestyle, a daily blessing, and her truest means of expressing herself.

“It’s just talking to people. I like being able to zero in on one or two people, which you can do easily in a small setting. I love the energy of a big audience, but I also love the lull of really quiet, really chill gigs. When I play live, I say to people that ‘I’m your entertainment, but, at the same time, you’re mine.’ Even if it’s just one person who’s nodding their head, you can tell that they just get it, and that’s what makes it all worth it.”