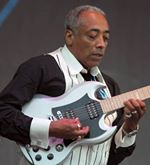 Gary Martin, blues artiste, is a gifted guitarist, singer, and arranger who brings authenticity, excitement, deep expression and emotion to his performances. Chicago born, with Mississippi roots, this child protégé was influenced by Jimmy Dawkins along with a long line of Chicago blues legends. Mentored by his uncle Hubert Sumlin and Howlin Wolf, Gary was fronting his own bands by the age of 14, shared the stage with Wolf, competed against the likes of the Jackson Five, recorded with Chess, and had a song on the Billboard charts while in his teens.
Performing with blues veterans across Chicago, this young guitarist quickly made his name known performing not only the blues, but jazz, soul and rhythm & blues. It was Tyrone Davis who encouraged him to sing. In his quest to perfect his roots Gary sought out and has studied with over 100 masters; Wayne Bennett, Little Milton, Carey Bell, Philip Walker, The Scott Family, Tal Farlow, Peter Cozy, Hank Monis, Barney Kessel, George Benson, Earl “fatha” Hines, Herb Ellis, Domenic Troiano and members of Motown’s illustrious Funk Brothers to name only a few. Miles Davis once stated “Gary will be a man of all seasons because of the all the styles he is mastering”.

Gary is authentic blues, blending passion and showmanship into his own distinctive style which he dominates with insane skill on guitar. His energy is catching, his talent authentic, and his performances memorable. As bandleader, touring and session musician Gary has worked with multiple Juno and Grammy award winning artists. Known as an “A” performer he works with touring acts as musical director and has shared the stage with numerous music icons. This modern-day Renaissance man is a strong and outspoken lobbyist of blues music.

Gary Martin is a sharp dressed, foot stomping, guitar picking powerhouse of motion, who has you spellbound from the first note, making you dance, sing, laugh and cry. He is the funky bluesman with soul. He is the Blues at its finest. He is authentic Chicago Blues. He is the Prince of Blues.