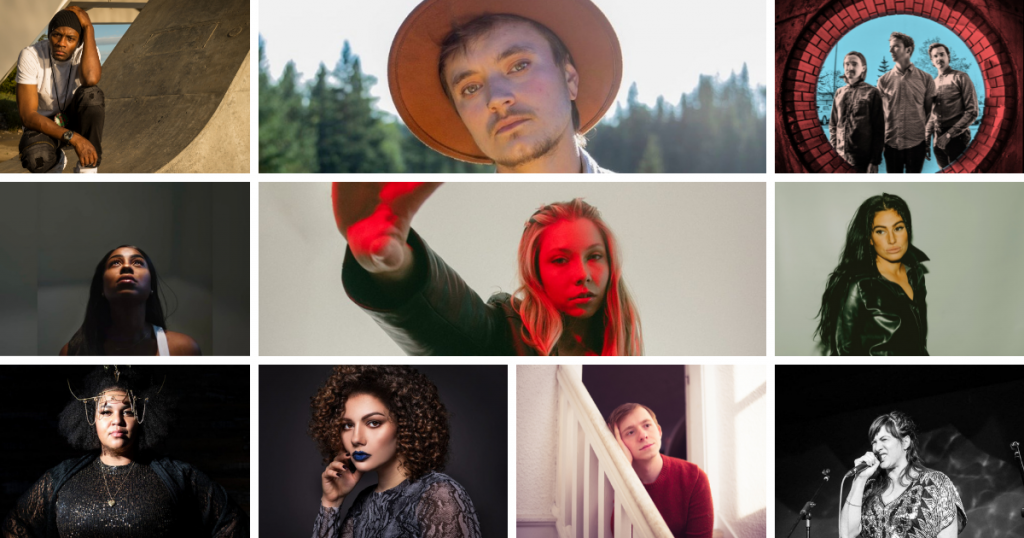 This is the tenth year that the Edmonton Music Prize has been offered, and it awards $12,000 in prize money to Edmonton-based musicians or musical collectives who have released a full-length recording in the past 18 months. The award is sponsored by the City of Edmonton through the Edmonton Arts Council and administered by Alberta Music.

Alberta Music assembled a jury of industry professionals, who reviewed the 40 nominations that were submitted and selected from among them a long list of 10 artists. From this list, the jury will be selecting the 3 finalists who will receive prize money and be recognized by the Edmonton music community. In addition to the primary assessment of the musical component, the jury also takes into consideration how the artists have made a unique contribution to the city. The top 3 finalists and the winner will be announced virtually on March 22nd from Production World in Edmonton and broadcast on Alberta Music’s Facebook page.

“It was so incredibly inspiring to see the depth and breadth of creative output from Edmonton artists during the course of this pandemic. Alberta artists have once again shown their incredible talent and dedication to their crafts despite tremendous challenges and obstacles. As we celebrate these artists and listen to their music, we are reminded of the important role that music plays in each of our lives and we welcome all Edmontonians to join us in this moment,” said Alberta Music Interim Executive Director, Christine Rogerson.

The first place winner will take home $10,000, and two runner-up prizes of $1,000 each will be awarded. The three finalists will be announced virtually on March 22nd. Also for the tenth time, the shortlist for the 2021 Edmonton Film Prize finalists have been announced. The Edmonton Film Prize is intended to recognize Edmonton-based filmmakers who demonstrate artistic and technical excellence, is sponsored by the City of Edmonton through the Edmonton Arts Council and administered by the Alberta Media Production Industries Association (AMPIA). Entries are judged by an independent jury of filmmakers and members of the film community. Besides the primary assessment of the work’s quality, the nominees’ unique contributions and outstanding accomplishments in the film community were also given consideration.

This year’s Edmonton Film Prize shortlist (in alphabetical order) are:

Family Ever After (Guy Lavallee)

Our Game: Road to the 2021 World Juniors (Shane Fennessy)

“Once again we had a very diverse group of entries this year,” says AMPIA Executive Director Bill Evans. “ Even during the pandemic, the filmmaking community in Edmonton continues to create great work.”

As with the Edmonton Music Prize, a total of $12,000 in prize money will be awarded to the three finalists among this list of five, with $10,000 for the first-place film and $1,000 each for two runners-up. The finalists will be announced virtually on March 22nd from Production World. The live stream will be carried on AMPIA’s Facebook page and our YouTube channel.

The Edmonton Arts Council is a not-for-profit organization that supports and promotes the arts community in Edmonton. On behalf of the City of Edmonton, the EAC, through it’s 10-year strategic plan, Connections & Exchanges, works toward transforming Edmonton’s cultural ecosystem.