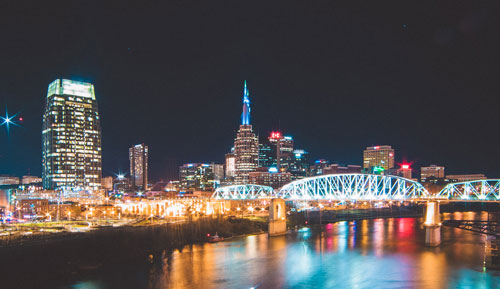 1990: A committee established by Nashville Mayor Bill Boner was in the process of beginning the search for sister city candidates when a member of the city council in Edmonton contacted Mayor Boner’s office and proposed a sister city relationship between Nashville and Edmonton. The city council member was enthusiastic about the possibility and had many ideas for exchanges. The idea seemed like a good one since both cities were very interested in music and seemed to have much in common and having a relationship with a city in one of our two neighbours seemed logical. Mayor Boner indicated that he thought this was something we should try. The committee agreed and the appropriate resolutions were prepared and passed in 1990, and the relationship was established. Edmonton provided Nashville with a plaque commemorating the occasion.

In 2014 and 2015, then Mayor Karl Dean visited Edmonton during the city’s Canadian Country Music Awards and its Folk Music Festival. At the Folk Music Festival, Mayor Dean addressed the crowd of 20,000 and together with civic and arts leaders, celebrated the 25th anniversary of our sister city twinning. In August 2015, more than 150 Canadians visited Nashville to attend native son Brett Kissel’s Grand Ole Opry debut and to meet with Sister Cities representatives. In August 2018, a delegation from Nashville visited Edmonton to connect the Cat Financial/Finning offices in our city and to meet regarding Edmonton’s initiatives in light rail, climate change, connected vehicles and future energy systems.  The delegates also discussed plans for the 30th anniversary of our twinning in 2020.

Nashville is the capital of the U.S. state of Tennessee and home to Vanderbilt University. Legendary country music venues include the Grand Ole Opry House, home of the famous “Grand Ole Opry” stage and radio show. The Country Music Hall of Fame and Museum and historic Ryman Auditorium are Downtown, as is the District, featuring honky-tonks with live music and the Johnny Cash Museum, celebrating the singer’s life.

As the city’s name itself is a metonym for the country music industry, many popular tourist attractions involve country music, including the Country Music Hall of Fame and Museum, Belcourt Theatre, and Ryman Auditorium. The Ryman was home to the Grand Ole Opry until 1974 when the show moved to the Grand Ole Opry House, 9 miles (14 km) east of downtown. The Opry plays there several times a week, except for an annual winter run at the Ryman.

Bill Porter’s audio console at RCA Studio B in Nashville. Studio B was the birthplace of the Nashville sound.
A multitude of music clubs and honky-tonk bars can be found in downtown Nashville, particularly the area encompassing Lower Broadway, Second Avenue, and Printer’s Alley, which is often referred to as “the District”.[107][108]

Each June, the CMA Music Festival (formerly known as Fan Fair) brings thousands of country fans to the city. The Tennessee State Fair is also held annually in September.

Nashville was once home of television shows such as Hee Haw and Pop! Goes the Country, as well as The Nashville Network and later, RFD-TV. Country Music Television and Great American Country currently operate from Nashville. The city was also home to the Opryland USA theme park, which operated from 1972 to 1997 before being closed by its owners (Gaylord Entertainment Company) and soon after demolished to make room for the Opry Mills mega-shopping mall.

Music Row houses many gospel music and Contemporary Christian music companies centered around 16th and 17th Avenues South. On River Road, off Charlotte Pike in West Nashville, the CabaRay opened its doors on January 18, 2018. The performing venue of Ray Stevens it offers a Vegas style dinner and a show atmosphere. There is also a piano bar and a gift shop.[109]

Although Nashville was never known as a major jazz town, it did have many great jazz bands, including The Nashville Jazz Machine led by Dave Converse and its current version, the Nashville Jazz Orchestra, led by Jim Williamson, as well as The Establishment, led by Billy Adair. The Francis Craig Orchestra entertained Nashvillians from 1929 to 1945 from the Oak Bar and Grille Room in the Hermitage Hotel. Craig’s orchestra was also the first to broadcast over local radio station WSM-AM and enjoyed phenomenal success with a 12-year show on the NBC Radio Network. In the late 1930s, he introduced a newcomer, Dinah Shore, a local graduate of Hume Fogg High School and Vanderbilt University.