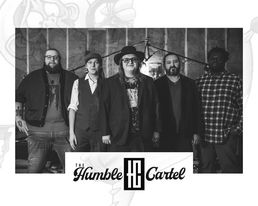 The Humble Cartel is a five-piece band from Red Deer, Alberta, Canada. Their sound runs the proverbial musical gamut, from Folk/Country, to Rock, Blues and Soul. Some songs are Pop driven, and cause an involuntary tapping of your toes to the rhythm of the beat, while others are introspective ballads that often make one ponder the very meaning of their being. When the band takes the stage, it is easy to relate to the tales that often springboard from real life experience (whether it be of love, loss, or lessons learned). It doesn’t hurt that their songs come packaged in silky-smooth, sometimes nostalgic waves of sound.

The band is composed of likeminded individuals with a singular purpose, to produce music that they can be proud of. Brothers Kye and Jesse Mykietiak started the ball rolling, and slapped together some rudimentary songs. But it wasn’t until they were joined by close friend and drummer Carlos Copaban, that a direction and sound began to take shape. Under his guidance, and with the aid of two other close friends, Andrew Logsdail (guitars/keyboard) and Dylan Cave (Bass), they are ready to take the world by storm.

Having opened for the likes of Hillsburn, Partner, Wintersleep, and Crash Test Dummies, this young band is already gaining quite the local following. With six singles available on all major platforms, and an EP on the way in early 2022, they plan on flying a rocket into the hearts and minds of other music connoisseurs, while remaining true to their down-to-earth, humble roots.