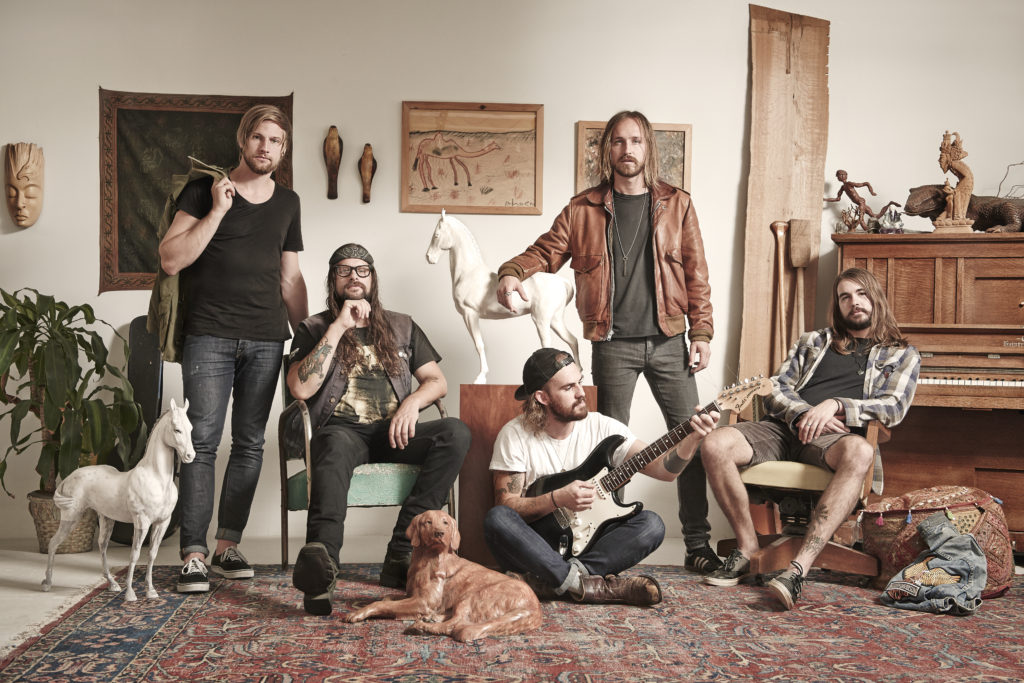 You can’t stop a mammoth.

Forged from rock ‘n’ roll soul, blue-collar charm and a renegade attitude, it’s no surprise this quintet of bearded prairie men made a lasting impression with audiences on their well-received 2014 EP, Mountain. Royal Tusk‘s full-length debut, DealBreaker out May 6, 2016 via MapleMusic Recordings, embraces a dynamic evolution in the band’s sound. Produced by the award-winning Eric Ratz (Big Wreck, Monster Truck, Arkells, Billy Talent), DealBreaker captures the true raw energy Royal Tusk wield, and the result is loud and guitar-driven with hints of Americana and soul.

Lead vocalist and guitarist Daniel Carriere says: “We’ve always been a guitar-driven band, but Mountain focused on highlighting our pop songwriting. For DealBreaker, we wanted to maintain that songwriting integrity, but make an old-fashioned heavy-guitar record.” After touring with Royal Tusk, Ian Thornley of Big Wreck was so impressed he lent his venerable guitar skills to DealBreaker with a massive solo on “So Long The Build Up”.

“These are really great guys, in a really great band. It was an absolute pleasure to play on their record.” – Ian Thornley

DealBreaker is best listened to in its entirety. Though there’s a broad spectrum of songs, they’ll each draw you in. Whether it’s the raw energy of “Curse the Weather,” the anthemic sing-along choruses of “Soon,” or the authentic heartfelt songwriting in “Not So Fast,” there’s a track on the record that feels like it’s there just for you. The album opens with the bombastic “Dynamo,” and the first half of DealBreaker flies by in a gritty fury, finishing off with “Cold On Me,” a groovy tune which features a four minute off-the-floor jam reminiscent of Deep Purple. The second half opens with Royal Tusk’s lead single “Fever,” a jubilant yet desperate song of a love-lost sleepwalker, searching for clarity. Only after the last note disintegrates you realize what a journey DealBreaker is.

Royal Tusk was born with a shared love for the craft of music, and a natural chemistry that manifests itself in the band’s songs and in its fiery live performances. Carriere and Sandy MacKinnon (bass) spent 12 years in beloved JUNO-nominated Edmonton band, Ten Second Epic and knew they weren’t done making great music. They rounded up Quinn Cyrankiewicz (guitar), Calen Stuckel (drums) and Mike James (keyboard/guitars) for a jam session, and just 10 months later the band headed to New York to record Mountain with Gus Van Go (Hollerado, Whitehorse, The Stills). “Shadow of Love” and “Smoke Rings” were breakout tracks off Mountain and both saw significant radio-play. These singles helped earn Royal Tusk a 2015 SIRIUSXM Emerging Artist of the Year nomination, an “artist of the month” nod from Sonic 102.9, and a short-list spot for CBC’s 2014 Rising Star Award.

After touring extensively and sharing the stage with artists including Big Wreck, Dear Rouge and Metric, Royal Tusk has spent the past year writing, embracing growth in its sound and songwriting. It’s no doubt that with DealBreaker you can expect a louder, more confident and longer-haired Royal Tusk.