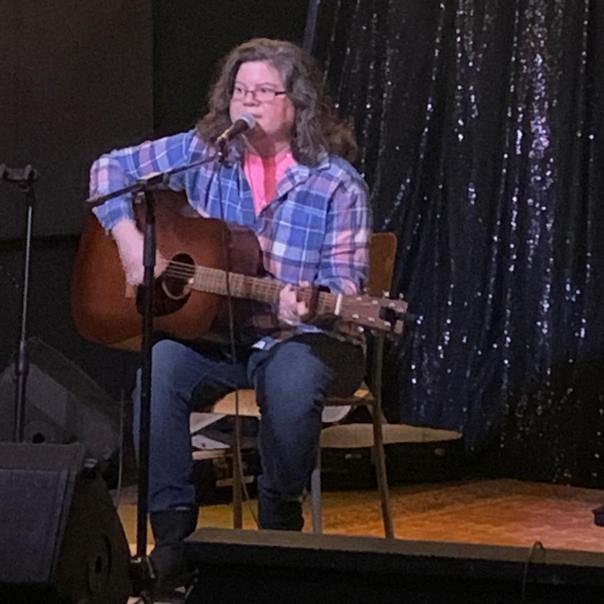 Paula Eve Kirman is a singer/songwriter who writes and performs music with a message.

She has been performing her original work in Edmonton since 2007 at a variety of festivals, social justice events, and cafes. She became interested in both music and social justice at a young age, in part due to being raised on her mother’s love of 60s folk music by the likes of Joan Baez, Bob Dylan, Buffy Sainte-Marie, and Peter, Paul and Mary. After receiving her first guitar at 13, Paula immediately began to teach herself how to play and write songs.

Paula’s lyrics and poetry are especially known for having themes of social justice, and has been a contributing factor to a number of awards she has received for her activism (see list of awards below). Her song “Summer,” about homelessness, was a finalist in the 2017 International Songwriting Competition, making it to the top three percent of entries out of about 16,000 worldwide, and making her the only finalist that year from Edmonton. “Summer” was also a semi-finalist in the Spring 2019 competition of the Music City SongStar songwriting contest.

For Paula, music is a way of reaching a wider and more diverse audience with her messages of peace, human rights, women’s issues, the environment, and other social justice themes. It is an extension of her life as an activist and community organizer, as well as her career as a journalist, photographer, and filmmaker.

An award-winning activist and poet, some of her accolades include:

*The Human Rights Champion Award from the John Humphrey Centre for Peace and Human Rights in 2016 for being a pioneering media artist and community organizer.

*The Edmonton Social Planning Council’s 2018 Award of Merit for Advocacy of Social Justice.

*The Salvos Prelorentzos Peace Award from Project Ploughshares Edmonton in 2012.

*Being named a Daughter of the Year at Edmonton’s annual Daughters Day Celebration in 2014.

*Two of Paula’s poems chosen for “Word On the Street” and sandblasted into sidewalks in the McCauley neighbourhood in the spring of 2018.