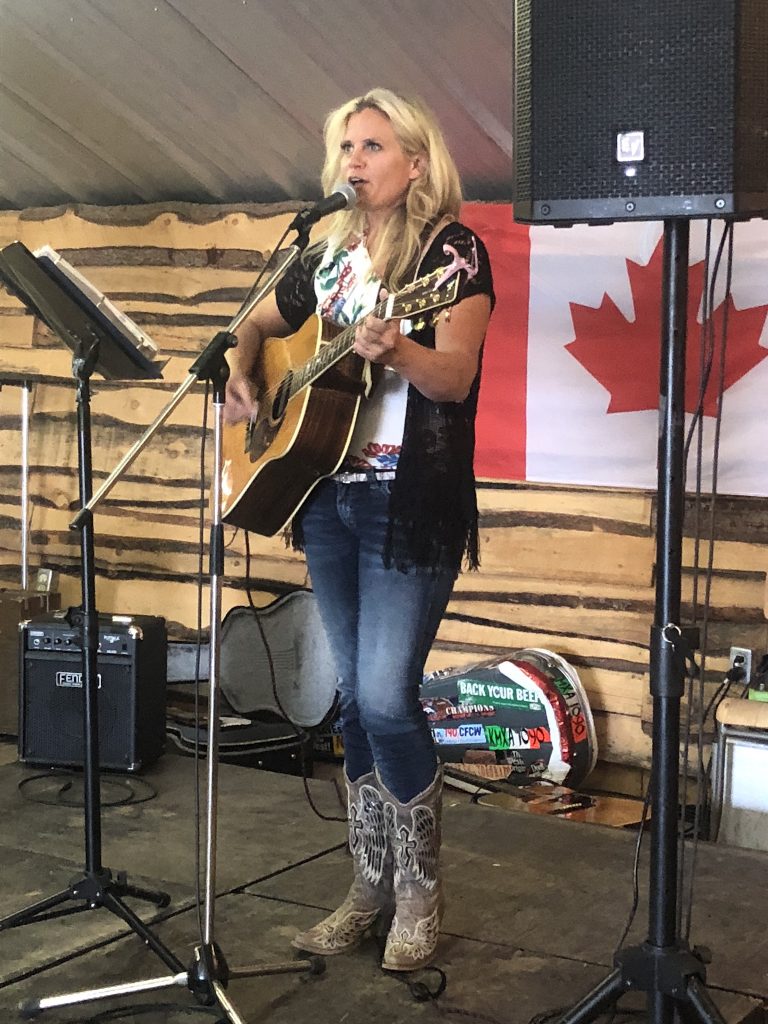 KIM THOMPSON -KT is an energetic, multitalented, triple threat artist born and raised in Calgary, Alberta. Not only is she one of the bright, new, singer-songwriter faces on the Canadian country music scene; but she is also an actress, barrel racer, rodeo athlete, barrel race producer, Alberta Music Fest producer, a horse trainer, artist, author, charity fundraiser and current teacher of elementary school with two degrees. Her passion is writing and recording her songs of which she has 100’s to choose. Kim writes about 5 songs per month. She is member of the ACMA, Alberta Music and CCMA.
Kim’s fun-loving personality is mirrored in her upbeat music; songs like “Feeling So Good” and “Game of Love” will get your toes tapping and your windows down. Her music is reminiscent of Crystal Gayle, a welcome throwback, especially in heartfelt songs like “Missing You” where Kim shows her softer side. Influenced by classic country Lorretta Lynn, Tanya Tucker, Johnny Cash, and pops to beats like Megan Trainor, Taylor Swift, but raps to Drake and Kid Rock. Kim enjoys the alternative Tragically Hip and Blind Melon and kicks back ABBA and Blondie at times. Her bright engaging personality combined fun-loving passion for sharing music will be the catalyst in propelling her through her music journey; enabling her to make many friends and fans along the way.
Eager for production of an album and tour, Kim has attended many Alberta Music Round Circles in 2018 to build a team. She is applying for various artist opportunities such as Project Wild, Yeg at the Black Bird Edmonton, The Alberta Ag Association for cabaret shows, Anthem appplicaiton to NHL, CFL, NFL and collaborating to cowrite joining the Songsmiths in Calgary for 2019.
Performances such as Daines Picnic, Ponoka Stampede, Red Deer CFR Cheers, Calgary Stampede 2018 Sugar and Spurs Barrel Race at the Calgary Stampede where Kim both sung the anthem while riding her 6 yr old colt she trained with the Canada flag. She held a new fundraiser with the Alberta Music Fest production. Alberta Music Fest at Calgary Stampede supported artists like Armond Duck Chief, anthem singer Michela Sheedy, Project Wild winner Tanya Ryan, Cam Ron and Josie Kirkpatrick. She enjoys acting and tv commercial work some of which include CO-OP, tv and Netflix Heartland, Disney and Broke Back Mountain. She and Matt Blais produced an entertaining video on YouTube for the first release to radio, “Game of Love”. Generating a co-write with Tanya Ryan for artist development, revamped the website.
When Kim can be found spending time with her family, at rodeos spearheading fundraising efforts for The Ronald McDonald House and Kids Care for Cancer with her annual Sugar & Spurs Barrel Racing Event. Kim’s newest release will be early 2019 with new video with Luke Moore “Thinkin Bout” a current co-write with ACMA male artist award winner Chard Morrison.
In the future, Kim plans to tour Western Canada along with a stage show to share her album in Europe and the USA. She would like to open her writing to working with the NHL, CFL and NFL if given the opportunity to sing. Singing anthems will be a focus this year. Kim may have a future connection with the CFL athletes. Kim believes this is a great opportunity to pursue.
KIMTHOMPSON.CA