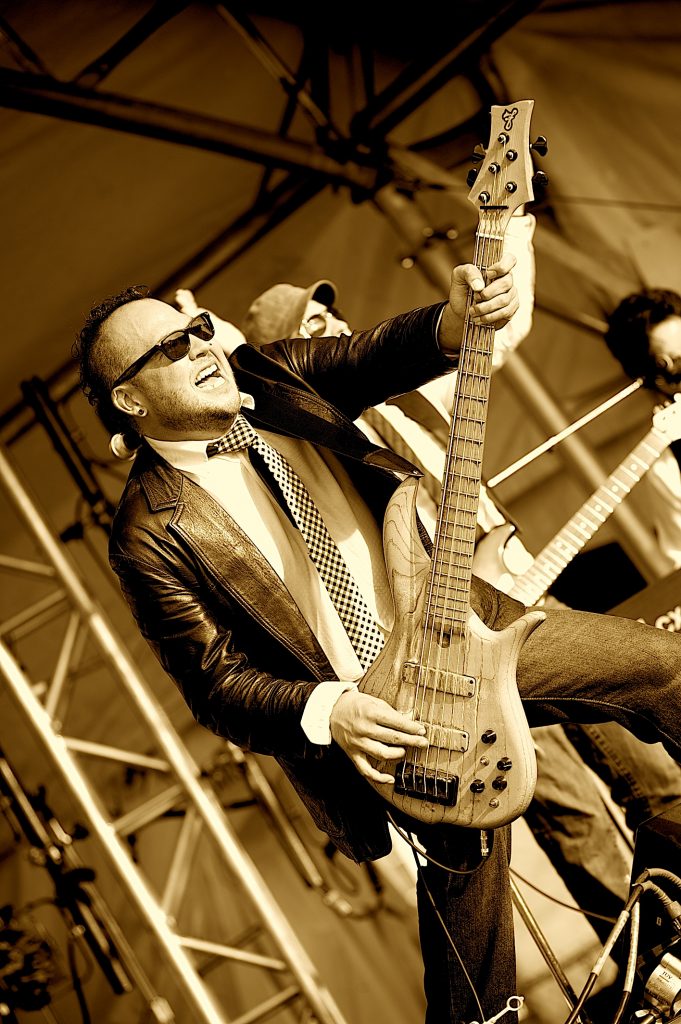 A love for all roots music has taken Jory Kinjo around the world in the last 20 years of his musical career, sharing stages with a range of artists from BB King to ZZ Top. He was raised in R&B, Blues & Soul music, but his career has touched on Funk, Jazz, Reggae & Ska.

Kinjo joined Calgary soul band Mocking Shadows in 1999 and still plays with the band to this day. With the Shadows, Kinjo has seen multiple tours with B.B. King, shows with Buddy Guy, ZZ Top and dozens of other legendary artists.

In 2008 Kinjo played bass on a European tour with Montreal’s third wave ska band, the Planet Smashers. The Smashers were performing at various punk/ska venues with a highlight performance with Bad Religion at Belgium’s Groezrock Festival. This experience sparked a new love for Ska & Reggae music for Kinjo.

Following his newfound inspiration, Kinjo began a solo career and took his music in a new direction in 2009. His venture into the Ska/Reggae world has resulted in shows and tours with such bands as Fishbone, UB40, the English Beat, Ziggy Marley and the Wailers.

In 2010, Jory began performing in Japan with his younger brother, Kaley Kinjo. The Kinjo Brothers perform in both Japanese and English at various festivals and venues.

From 2014 – 2017, Kinjo moved to New York City part time and worked with such Ska bands as the Slackers and the Rocksteady 7. Kinjo performed and recorded in NYC, often forced to write and practice in the subway in the late hours to escape the noise restrictions of his East Village apartment.

Kinjo has since returned to Alberta and started throwback soul label, Kimberlite Records with some partners. He continues to perform, his solo show a varied and sincere one. His songs and multiple styles reflect a storied and unique past in the life of a Canadian musician with a career spanning over two decades.