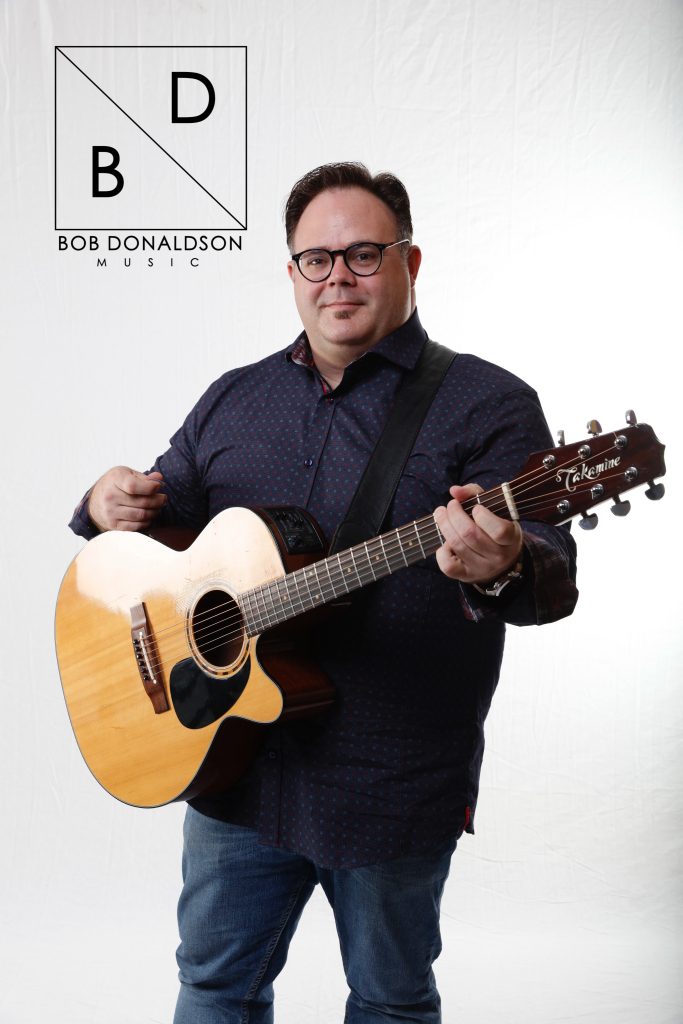 Bob Donaldson grew up in Rimbey, a little town in Central Alberta. Where he was surrounded by music all the time. Family and family friends all from the east coast were always at his parent’s house with guitars, banjos, fiddles and everything that constituted an instrument.
For over 30 years of playing guitar and entertaining, you can see his musical influences in his writing style as well as his unique arrangements of traditional and not-so-traditional covers. His music can be described as “Acoustic Music with a Twist” and of course a comedic flare.

His musical influences go from Johnny Horton, Oak Ridge Boys to Garth Brooks, Beach Boys, The Nylons, Metallica, Guns and Roses and everything in between. Bob is no stranger to the stage, whether it is opening up for the legendary Dr. Hook, headlining comedy shows with his musical comedy to performing as lead characters in musical theatre and his music and vocal directing. He is now based out of Edmonton.

Bob Donaldson is a singer/songwriter with over 30 years’ experience. Bob is very interactive with an audience with an uncanny ability to do lots of requests and has a comedic flare that creates an intimate and relaxing atmosphere.
Whether you’re looking for just a performer or an emcee or fundraising organization emcee, Bob is your pick. In addition to the musical performances and emceeing events, Bob was also president of the Rotary Club, so his understanding of fundraising and generating income is also “front and center” when required.

2018 has been an amazing year for Bob. In the spring Bob put the final touches on his Album “Here and Now (Demos and Other Things)”. This album consists of 30 years of writing. The title track is an instrumental that sat in the #1 spot of the 2008 Hockey Night in Canada Theme Contest for 6 Weeks. With other tracks professionally recorded and some that were recorded in a home studio.
Since the album has been released it has started a snowball effect. In June Bob was part of “Make Music Edmonton” on 124th Street, July brought about a four show run at the K-Days Beer Gardens (2 hour sets each day) where there was huge interactions and all four shows were different and suited the audience. Two of the shows were filmed as well.

The summer didn’t slow down as bookings took off. In September Bob was chosen by the
Association of Country Music in Alberta (ACMA) to represent Alberta on the national stage in Hamilton during the Canadian Country Music Association (CCMA) Country Music Week at the “ACMA at CCMA” Show Case.

October (2018) was just as exciting as it was announced that Bob is a first-round contender for the ACMA Alberta Country Music Awards for three categories: Album of the Year, Song of the Year and Fans Choice Award. The Album of the year award is already progressed to the second round.

On October 19th Bob had the opportunity to open for Canadian Country Music artists Gord
Bamford, JoJo Mason and Jade Eagleson during the “Honky Tonks and Dive Bars” tour.
2019 is no less active. Bob has headlined “Happy Hour” at The Station on Jasper as well as the Sunday Brunch, is featured in the Songwriters Circle at the ACMA (Association of Country Music of Alberta) Awards in Red Deer, Emceed & Headlined a Singers/Songwriter Night in Edmonton, performed for Robbie Burns Night at Unity Highlands Freemason Lodge and headlined his own show with his band. Other performances include Sunday Brunch at The Station on Jasper, Finalist on CKFM’s Star Search, Fionn McCool’s and other shows.

April 15th Bob released his first single “Second Chances (Going Down This Road Again)” which features Shane Guse from The Western Swing Authority on Fiddle and Mandolin. Currently the single is #1 on the Ignition Country Indie Charts in the UK as well as #27 in the HBG Canada Charts.

May 1st the Official Video for “Second Chances (Going Down This Road Again)” was released.

Bob teamed up with SCARS (Second Chance Animal Rescue Society) to bring awareness to
animal rescue and giving a dog or cat a “second chance”.

In addition, in May 2019, Bob was awarded first place in the K-Days 2019 Talent Search and proceeded to the semi-finals competition at K-Days 2019 and currently plays shows at
the Edmonton International Airport for travellers.

2019 is full of shows as well, from Sherwood Park and Edmonton to festivals like Darwinpalooza 2 in Bragg Creek, Alberta Country Music Fest in Cochrane and Ivan Daines Friends and Heroes Pick-Nick in Innisfail/Penhold, Ribfest in Leduc as well as great little venues like Boston Pizza
Ice District in Edmonton and Capone’s After Dark (Sweet Capone’s) in Red Deer. Bob will also be performing 3 shows at the Canadian Finals Rodeo in Red Deer and 2020 will see him performing in Banff, Rimbey, Edmonton and at Rogers Place in Edmonton prior to the
Edmonton Oilkings game against the Medicine Hat Tigers. Bob was nominated for the 2019 ACMA Awards for the Community Service Award. He is also nominated for three awards at the 2020 International Singer Songwriters Association Awards;
International Male Single of the Year for “Maybe”, International Songwriter of the Year and International Album of the Year for “Here & Now (Demos and Other Things)”.

During the COVID 19 Pandemic Bob performed a living room concert that reached over 67,000 people with almost 40,000 views. Bob’s past performances and involvement in the music industry from hosting festivals, headlined main stages from Edmonton to Medicine Hat and has opened for Dr. Hook among others makes him a perfect artist for your event no matter how big or small!