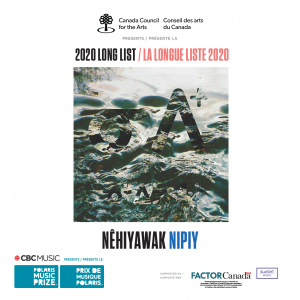 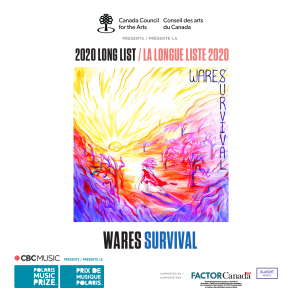 The Polaris Music Prize, presented by CBC Music, has revealed its 40 album Long List, presented by Canada Council for the Arts. Alberta artists, Wares and nêhiyawak have landed much-deserved spots on this list!

nêhiyawak hails from amiskwaciy in Treaty 6 Territory. The trio of Indigenous Canadian artists – Kris Harper (vocals, guitars), Marek Tyler (drums), and Matthew Cardinal (synths, bass) – transcends a new intersection of contemporary sound and traditional storytelling. The band – whose name refers directly to their nêhiyaw ancestry – is a spirited expression of Indigeneity in the modern world.

Wares is a musical project engineered by Edmonton musician Cassia Hardy. From teeth rattling electric convulsions to barely-there, reverb drenched refrains, the musical inflections explored by Wares are as varied as they are enthralling.

This year’s Long List was unveiled in a video broadcast via the Polaris Facebook page and YouTube channels. An exceptional cast of past Polaris nominees were enlisted to present each Long List album. The Polaris Music Prize awards $50,000 to the artist who creates the Canadian Album of the Year, judged solely on artistic merit, without consideration for genre or record sales. Additionally, the nine other nominated acts whose albums make the 2020 Short List will receive $3,000 each courtesy of Slaight Music.

The 10-album Short List will be revealed on July 15  on a CBC Music radio special and the 2020 Polaris Music Prize winner will be revealed live on the CBC Gem streaming service and CBCMusic.ca/Polaris.