Alberta Music at the Great Escape 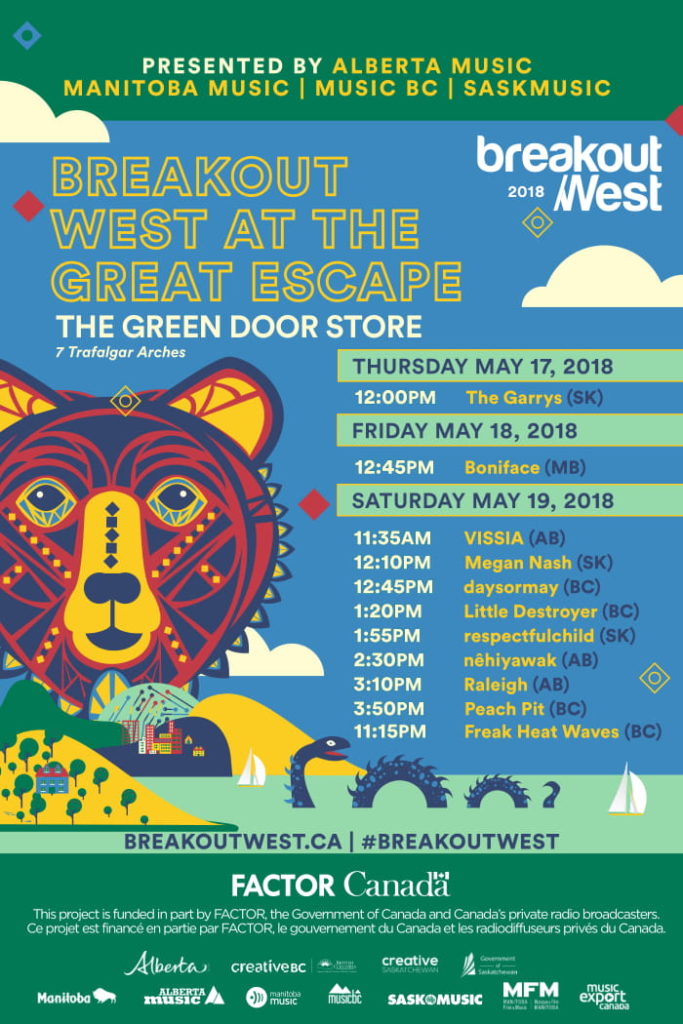 As part of the BreakOut West partnership with The Great Escape Festival, the following Albertan artists have been invited to showcase in Brighton, UK.

nêhiyawak
nêhiyawak hails from amiskwaciy (Edmonton) on Treaty 6 territory. Comprised of Kris Harper, Matthew Cardinal, and Marek Tyler – three Indigenous musicians coalescing at the intersection between traditional and contemporary music. Their sound at times loud and sweeping, and in moments – reticent and careful. Recording their first EP in November 2016 with Colin Stewart (The New Pornographers, Black Mountain, Dan Mangan), the music balances the band’s heritage with the present. Indie-rock guitar and dance floor synths blend and walk alongside the steady beats of carved cedar log and hand drums. nêhiyawak tells stories – their story – capturing time through honeyed and haunting vocals, swaying in and out of the cacophony of electronic and analog sounds. Within the framework of the conventional song, the band creates and adds their own history and stage. Collecting and piecing together their experiences – existing simultaneously between diverse and disparate cultures – nêhiyawak shares with its audience their unique expression of Indigeneity in Canada today. Nêhiyawak ᓀᐦᐃᔭᐊᐧᐠ Pronunciation: neh-Hee-o-wuk (emphasis on 2nd syllable) | Meanings: Cree people, People of the Plains, Plains People, Exact People.

RALEIGH
Unafraid of both straight-up hooks and experimental song structure, RALEIGH is a band carving their own space in new music. Thoughtful refrains are woven by vocals, cello, and guitar, with drums and bass treading the groove together. It is indie rock, damaged by art, delicate and exposed but intimately pointed, connectivity through song.

Vissia
VISSIA [VISS-ee-yuh] is an old soul who bleeds blues through intimate, lyric-driven songs. Broadly called Americana, VISSIA’s sound is is distinctly her own yet manages to connect listeners to their own most favourite private feelings and imagined landscapes. Her new album, Place Holder, is “a must-listen.” (Katherine Duncan, CBC Key of A) – pure rock ‘n’ roll at its finest from an artist who is set to breakout at any moment.
Raised in small-town Alberta, VISSIA has matured graciously as a musician. From composing, to recording, to album art and design, VISSIA’s ability to unite her talents and poetic instincts is a testament to her decade and a half engagement and perseverance in all areas of making music.
Since her solo debut in 2011, VISSIA has shared stages with Jim Bryson, Del Barber, Lindi Ortega, Whitehorse, Russel de Carle, Matt Anderson, and The Skydiggers. Her performances have included stages at the Edmonton Folk Music Festival, Canmore Folk Music Festival, Beaumont Blues & Roots Festival, as well as hundreds of tour dates across Canada from coast to coast.
In addition to her solo project, VISSIA can be seen playing in The Hearts and Bad Buddy.