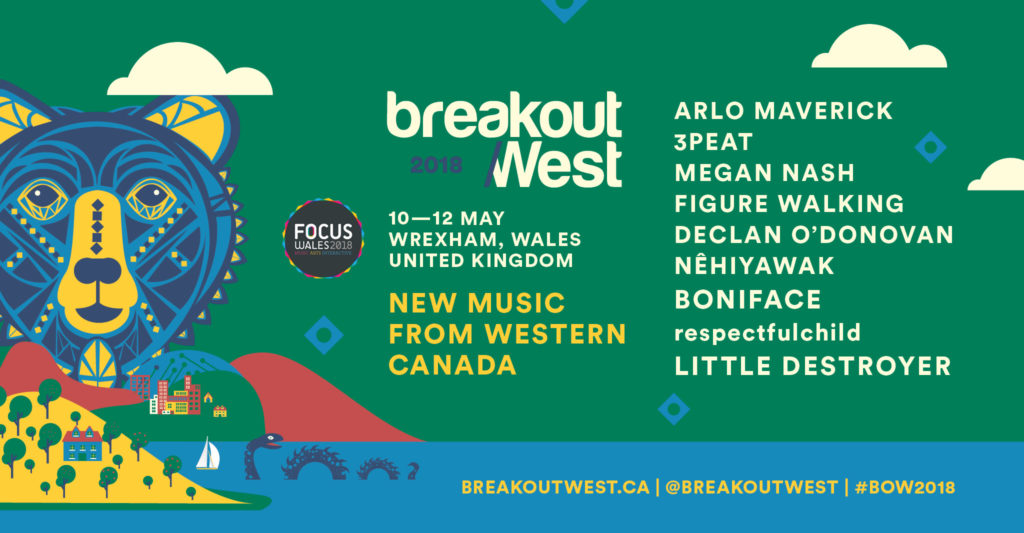 Alberta Music will be on the ground at Focus Wales, in the United Kingdom, form May 10 to 12. Alberta Music’s Executive Director, Carly Klassen, will be supporting our Alberta Music members, Arlo Maverick and nêhiyawak.

nêhiyawak hails from amiskwaciy (Edmonton) on Treaty 6 territory. Comprised of Kris Harper, Matthew Cardinal, and Marek Tyler – three Indigenous musicians coalescing at the intersection between traditional and contemporary music. Their sound at times loud and sweeping, and in moments – reticent and careful. Recording their first EP in November 2016 with Colin Stewart (The New Pornographers, Black Mountain, Dan Mangan), the music balances the band’s heritage with the present. Indie-rock guitar and dance floor synths blend and walk alongside the steady beats of carved cedar log and hand drums. nêhiyawak tells stories – their story – capturing time through honeyed and haunting vocals, swaying in and out of the cacophony of electronic and analog sounds. Within the framework of the conventional song, the band creates and adds their own history and stage. Collecting and piecing together their experiences – existing simultaneously between diverse and disparate cultures – nêhiyawak shares with its audience their unique expression of Indigeneity in Canada today. Nêhiyawak ᓀᐦᐃᔭᐊᐧᐠ Pronunciation: neh-Hee-o-wuk (emphasis on 2nd syllable) | Meanings: Cree people, People of the Plains, Plains People, Exact People. You can catch nêhiyawak during FOCUS Wales 2018: 7pm* on Thursday 10th May at Undegun *supporting Damo Suzuki of CAN (with some very special guests), and on 8pm Friday 11th May at Ty Pawb.

Arlo Maverick is an Edmonton-based hip-hop artist that has celebrated many recent successes. Some of these accomplishments include awards and nominations (WCMA/EMA); critical acclaim from accredited music sites in Canada (Exclaim/HipHopCanada.com) and the US (Rap Reviews/Pop Matters); showcasing at Breakout West (Canada) and Zandari Festa (South Korea); headlining the 40th Annual North Country Fair’s Friday night main stage (Canada); and national campus radio chart activity that landed him at #1 on Canada’s weekly hip-hop charts and #3 on the US weekly hip-hop charts. Arlo Maverick’s sound explores Jazz, EDM, and Soul yet identifies itself as hip-hop. Writing from his personal experiences, Arlo Maverick connects with his fans one song at a time. Be it songs about the innocence of falling in love, confronting one’s inner demons, or the struggles of making ends meet, Arlo Maverick’s music is as much about moving his audience physically, as it is about moving them emotionally. Stepping away from hip-hop’s tradition of just an MC and a DJ, Arlo Maverick incorporates this hip-hop staple with his live band, HFO. With influences like K-Os, The Black Keys and The Roots, Arlo’s live show is a fun, energetic and interactive experience where the audience is freed of their inhibitions to exist in the moment. Arlo Maverick is currently preparing the release of his sophomore album, Soul Merchant in early 2018. You can catch Arlo Maverick during FOCUS Wales 2018: at 8:05pm on Thursday 10th May at Set The Bar, and 6:00pm on Friday 11th May at Ty Pawb.